The Mercedes-Benz Actros 4x4 Riot Control Vehicle with its concept ranks among riot control vehicles for interventions with water, tear gas or dye. It is a special vehicle designed to operate on roads and also off the roads on rough undulating terrain.
It is built on the two-axle chassis Mercedes-Benz Actros 1836 AK and it is equipped with centrifugal pump with independent drive, water tank, tank for tear gas, tank for dye, roof monitors, self-protection system and camera system. The vehicle is designed to carry a six-member crew.

The driver’s cab is armoured, four-door, tilt cab. The driver’s and co-driver’s seats are fitted with inertia-reel safety belts and head-rests. Near by the driver’s seat, there is the monitor (display) for the rear reversing camera (the monitor is a part of the camera set). Near by the co-driver’s seat, there is the gunner’s control panel for the fire monitor (water cannon) located on the left side of the driver’s cab.
The rear row of seats is for four crew members and the seats are equipped with safety belts.
In front of the rear row of seats, there is (from the left): commander’s control panel, two folding working tables, keyboard to control the camera system, 19“ monitor used for all cameras imaging and gunner’s control panel to control the roof fire monitor on the right side.

The proportioning system allows tear gas or dye admixing into each roof monitor.
It is also possible to admix the tear gas into the defensive nozzles.

Camera system
The camera system is located in the driver’s cab. It consists of four cameras (cameras at monitors, camera on telescopic mast and rear reversing camera), two monitors (15“ for reversing camera, 19“ for all cameras) and the keyboard with joystick to operate the system.

Relieving device - hydraulic supports
It is used when the vehicle is inoperative for a longer time. It consists of four separate height adjustable supports.
These supports can be extended using the linear hydraulic motors and allow the vehicle lifting and the subsequent relief for the vehicle axles, suspension and tyres. 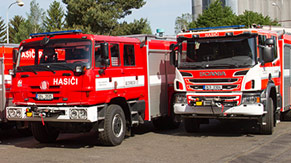 We will help you choose a suitable vehicle

Are you planning to buy new fire fighting equipment? We will be happy to help you with your choice. If you are going to issue an invitation for bids or just need more information before making an important decision, please contact us by fillling out a short form. We will reply as soon as possible. Thank you.